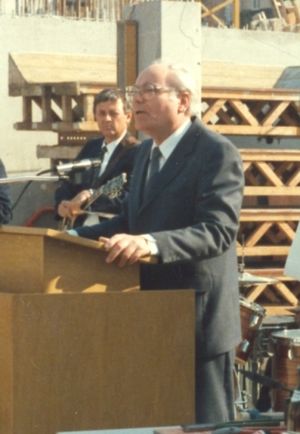 In March 1945 Bieringer was Luftwaffenhelfer in Rastatt. After he finished Abitur in 1948 he studied jurisprudence until 1956.

Dr. iur. Adolf Bieringer was delegate to the Kreistag of Bruchsal from 1959 to 1973 and afterwards delegate to the Kreistag of Karlsruhe In Addition, he was member of the Bundestag in 1961. In 1964, he was elected mayer of Bruchsal. His main achievements were the reconstruction of the chateau of Bruchsal (which had been destroyed in 1945), the merge of five smaller towns surrounding Bruchsal, and the redesign of the city centre of Bruchsal in the 1980s (which had started in the 1970s and was complteted by his successor Bernd Doll). He also took care for the friendship of Bruchsal with Sainte-Menehould (France) and Cwmbran (Wales)

In 1985 he became President of the Regierungsbezirk Karlsruhe.

Bieringer started to engage for environment protection which was one of his last topics before he had to stop work due to serious illness in end of 1987.

He became Honorary citizen of Bruchsal in November 1987.

A check for language is needed, isn't it?