The German word “Allee” denotes a tree-lined, straight and often wide, road. Thus, although the word has the same French origin, it is very much the opposite of an English “alley”, for which it should not be mistaken. Rather, its meaning is similar to the English “Avenue” and the French “Boulevard”, although, as long as they have trees and are straight, even quite small country lanes may be called “-allee”.

In Karlsruhe, the 14 southern radial roads of the Karlsruhe Fan have names ending in “Straße” (Street), the remaining 18 are, or at least once were, a something-or-other-“Allee”. 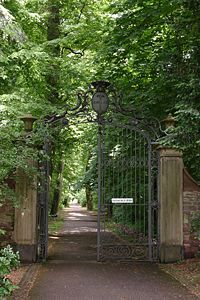 The Blankenlocher Allee, another radial of the Karlsruhe Fan

Kaiserallee
the main thoroughfare between Karlsruhe and its western suburb of Mühlburg.
Teutschneureuter Allee
one of the radial roads of the Karlsruhe Fan, a narrow forestry road running north-westerly from the Castle through the “Hardtwald” forest. Narrow, but definitely with trees. Parts of it are now called:
Kentuckyallee
the former Kentucky Avenue in the Paul Revere Village.
Durlacher Allee
the main thoroughfare between Karlsruhe and Durlach, its eastern suburb and predecessor as Residence. Only a few trees, but at least some, and very straight and wide.