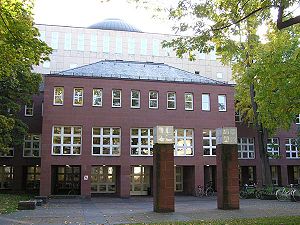 The Baden State Library (German: Badische Landesbibliothek, BLB) is a library in Karlsruhe.

In the beginning of the 16th century the first holdings of a Baden library were located in a room of the margrave's castle in Rastatt. This library had been split up for political reasons; in 1765 the now reunited collection of the court library was brought from Durlach to Karlsruhe. During the 19thcentury, the holdings of the secularized monasteries were added to the library's collection which moved into the building of the present State Natural History Museum on Friedrich Square. In 1942, 360.000 volumes were lost due to air-raid damage. The library was first rebuilt in the neighbourhood of the Nymph's Garden and moved in 1991 into the new building planned by Oswald Mathias Ungers in the Erbprinzenstraße. During the last years, 19th century novels from the margrave of Baden's private library and manuscripts and incunabula from the house of Fürstenberg were added to the library's holdings which in 1998 comprise more than 1.4 million volumes.