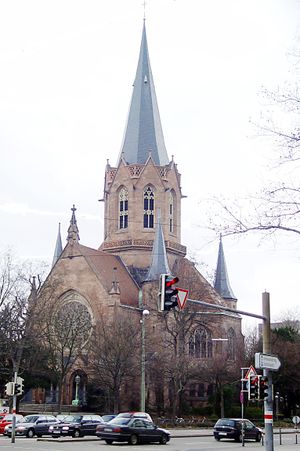 The Christuskirche (translated literally “Christ Church”) is a Protestant church located near the Mühlburger Tor in the Weststadt of Karlsruhe. 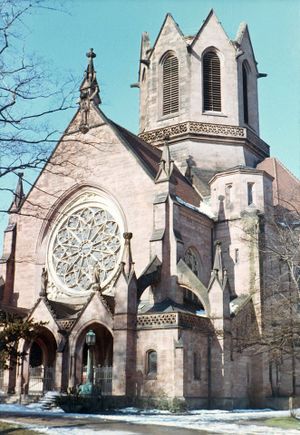 First initiatives to build a church at the site date back to between 1888 and 1892. An architectural competition was won by the Karlsruhe firm of “Curjel & Moser”, a partnership of a Jew and a Catholic who built churches for all denominations across Karlsruhe. Building began in 1896, and the church was consecrated on 14 October 1900.

Whereas the building's decorations (windows, arches, pinnacles) and overall impression were based on the Gothic style, opinion changed over the the time of construction, and many of the final details are Art Noveau (German: “Jugendstil”), then at the peak of its popularity. The layout as a whole, with transept and main nave of almost identical length and an octagonal tower over their intersection, is decidedly non-Gothic, and even shows elements of a Romanesque “round church”, deliberately placing the altar less remotely and more central to the congregation.

As had already happened in the First World War, the church's bells shared the fate of most bronze church bells and were melted down again in 1942 to support the Nazi war effort and be recast as munitions. The church was severely damaged in the major air raids on Karlsruhe of 2-3 September 1942 and 4-5 December 1944. Repairs began immediately after the war, completed with the installation of new bells on 3 April 1953, albeit without the church's original spire.

In a strange compromise between Anglo-French Gothic church towers and German Gothic spires, the original church had a plain spire planted on top of what is itself a perfectly complete tower. For four decades after the Second World War, however, the spire was not rebuilt, giving the church a fairly unique appearance in the German context, contrasting nicely with the really (neo-)Gothic spire of the Catholic Bernharduskirche at the opposite end of Kaiserstraße. In 1984, however, it was decided to restore the original plan and add the spire again. Work was finished in 1988, thus completing the post-war rebuilding program.

Some bells had been restored in the immediate post-war era, but a significant addition was the new “ Peace Bell” (“Friedensglocke”) in 1984, financed by public subscription with the names of about 1000 donors are engraved on the bell. It was cast in public at the Marktplatz and at f0 (176 Hz) it has the lowest pitch of any church bell in the German State of Baden-Württemberg.

From May 2008 to September 2009, the church was undergoing a program of renovation and refurbishments. This included repairs to leaking lead window frames and the addition of external secondary glazing, replacement of the electrical heating under the pews with gas-fired underfloor heating, which also implies renewal of the floors. The electrical systems will get computer-driven controls, but the old Herford “Läutemaschine” (translated literally “bell ringing machine”) will remain. New visitor's toilets will be installed in the basement of the church.

The church's original organ had undergone an unfortunate alteration in 1938, and then been damaged in the war.

In 1960, it was decided to replace it, and a new organ with 5000 pipes was built by the renowned Bonn organ builders Klais and inaugurated in 1966. This put the Christuskirche on the map for concerts and musical events such as the Karlsruher Orgeltage (translated literally “Karlsruhe Organ Days”).

40 years on, the Klais organ was also in need of restoration and improvements, at a price tag of Euro 1.3 million, which was raised through sponsorship concerts and art auctions. The organ was disassembled in June and July 2008 and is currently (June 2009) with Klais in Bonn for complete rebuilding. To widen its musical range, it will get an additional 1000 pipes while maintaining its distinctive sound, and is due to return to the church in its full glory, though in new decorative shape, by 2010. It will then be the largest organ between Freiburg and Mannheim.

In addition to the big Klais organ, there is very valuable and unique small mobile organ, built by organ builder Matthias Wagner of Grünstadt in 2004. It features eight registers and about 500 pipes, and is generally admired as a masterpiece of sound and of engineering.