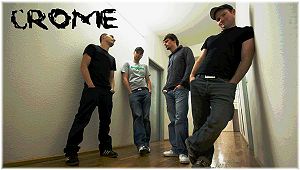 Crome is the name of a band from Karlsruhe and Stuttgart.

Stuttgart/Karlsruhe has a new, loud and gloomy star on its hardrock sky - CROME. As a quite common thing, some well-known people from Karlsruhe..s music scene pooled together to rock the boat!

Back in the days, Denis (guitar and vocals) and Patrick (drums) have been with the nationwide famous hardcore band pole* (http://www.polemusic.net) , having performed together in more than 250 live concerts across Europe (e.g. with Earth Crisis, Boy Sets Fire, Snapcase - just to name a few). Rob (guitar) was a member of Skastadt, Madstateworld (http://www.madstateworld.com), and from 2003 on he was also a member of pole*, alltogether playing not less than over 400 live gigs in the past 15 years. Not in the least versed in making music and having great live experience like the others, Thorsten is the man on bass-guitar. He performed in nearly 200 shows on some of the the real big german stages with his former band „Schein23“ (http://www.schein23.de), but also didn..t get very famous or even rich like the other three guys.

A long time passed before Denis, Patrick and Thorsten decided to found a new band in 2006 and in early 2008 the line-up of CROME was completed by Rob on guitar.

With a skillful balance between straight guitar rock, rough vocals, a touch of insanity and tight powerful drums, CROME can..t be pigeonholed. Neither hardcore nor emo or something like that can describe their style. It is simply honest and hard guitar rock at the highest stage! Rock till you drop!