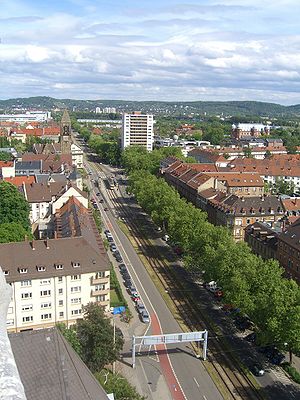 Durlacher Allee as seen from the spire of Bernharduskirche

The street starts at Durlacher Tor, passes the square Gottesauer Platz and extends to Ernst-Friedrich-Straße in Durlach. It crosses the Autobahn 5.

Most of the street is located in the city district of Oststadt. Between Ostring and the Autobahn, Durlacher Allee is the border between Oststadt on the south and Rintheim on the north side. East of the Autobahn it lies within the district of Durlach.

There are several tram stops on Durlacher Allee, e.g.

The street is named after the city district and former town of Durlach.