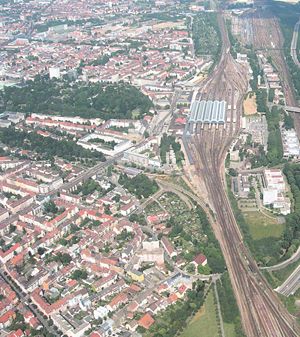 The Hauptbahnhof (abbreviated Hbf) is the main railway station, located in the southern area of the city centre of Karlsruhe. In the context of the railway network, it is called Karlsruhe Hbf. 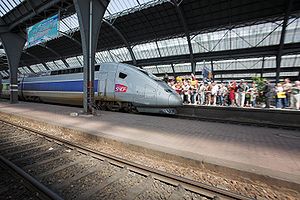 Two of the main connections of the Deutsche Bahn railway network, the north-south connection between Basel and Frankfurt / Köln (Cologne) and the Magistrale, intersect in Karlsruhe. Karlsruhe Hauptbahnhof can be reached by IC and ICE from Frankfurt within 1.5 hours, from Stuttgart within 40 minutes and by TGV from Paris via Strasbourg in three hours.

The local tram station is located on Bahnhofplatz, the square in front of the Hauptbahnhof. This is one of Karlsruhe's main tram stations, offering connections to many Tram and Stadtbahn routes in Karlsruhe.

The Hauptbahnhof is actually the second main station ever built in Karlsruhe. It was constructed from 1910 to 1913 and was opened on 22 October 1913. The original main station, located near the Ettlinger Tor, was opened on 1 April 1843, but had to make room for the expanding city of Karlsruhe. Today, the Badisches Staatstheater can be found at that location.

The Hauptbahnhof also played a role in the persecution of the Jews: In October 1940, the Nazis rounded up over 900 Jews here, which were then deported to Gurs in southern france.

The Hauptbahnhof was awarded “Station of the year 2008” in the category “city with more than 100,000 inhabitants” by the “Allianz pro Schiene”.