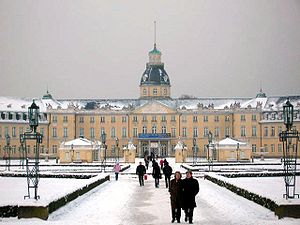 The Karlsruhe Palace (German: Karlsruher Schloss) was built in 1715 as the residence of Margrave Karl Wilhelm of Baden-Durlach. The architect of the partly wooden building was the engineer and lieutenant Jakob Friedrich von Batzendorf. The castle like the town had to be completely renovated in 1746, and the opportunity was taken to rebuild it entirely out of stone. It served for 200 years as the seat of government of the Baden dynasty. In the third quarter of the 18th Century it was fundamentally rebuilt and the interior was repeatedly changed and refurnished. In 1849 Grand Duke Leopold was thrown out of the palace by Baden revolutionaires. It finally left the monarchy in November 1918. In 1921 the archaelogical an ethnological collections and the holdings of the Applied Arts Museum were united as the Baden State Museum in the former residence. Karlsruhe Palace was completely destroyed by air raids, during September 1944. As a result of the rebuilding, the latest styles and technologies of museum design could be used.

In the castle the Badisches Landesmuseum is located. There you can find art and culture from earliest history to modern times.