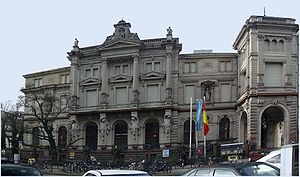 The Prinz-Max-Palais (English: Prinz Max Palace) is a former mansion house in Karlsruhe.

From 1900 Prinz Max, prince of Baden and Imperial Chancellor of Germany , was living here until 1918.

During World War II the building was heavily damaged.

From 1951 until 1969 the Bundesverfassungsgericht was located here.

Since 1981 it is a cultural centre with