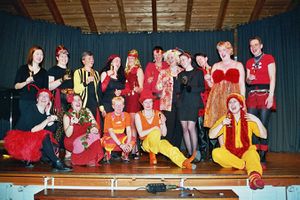 WEIBrations e.V. is a lesbian Choir from Karlsruhe.

The name WEIBrations pronounced “Vibrations” is a play on words with “Weib” being an old word for woman. In 1994 they were originally made up of only a handful of lesbians, who practiced in Ellen’s front room, who was their choirmaster at that time. One year later, they made their stage entrance at the opening of the Karlsruhe “Frauentreff” (a lesbian bar) still somewhat shy and in normal outfit, they sang their entire repertoire – three songs! Since then the sassy singers from Baden in South Germany have made a name for themselves in the lesbian choir scene and are well-known in and beyond their city… and have also learned a few more songs.

They feel at home both on the stage at the Women’s and Lesbian Choir Meeting in Berlin, the South German Gay and Lesbian Choir Festival in Munich or at the Gay Games in Amsterdam, and on local stages in the region between the Rhine and Black Forest. The WEIBrations are now taking part in “Various Voices” for the second time and are looking forward to all the amazing choirs and a great festival atmosphere.

The ca. 20 singers in their shrill outfits put the whole spectrum of lesbian life to stage and have no scruples in “torturing” well-known pop songs, oldies or German folk music. Their bold lyrics tell of desire and love, nosey neighbors, unsuccessful flirts and are dedicated to such problems as “How do I get a baby when I’m a lesbian”. Their versatile and sophisticated repertoire also includes classics, international music and experimental rap.

Since 2002 the choir has been under the conductorship of Eva Hilfinger, who completed her musical training in 1988 with the “Badischer Sängerbund”, a singer’s alliance. She took a step away from the Catholic Church choir in her home village and ventured musical steps into the world of conducting different types of choirs with various musical genres.

The WEIBrations also have lots of fun together outside of the concert halls: at barbeques in summer, hiking from the Black Forest mountains into the pubs in Autumn and in Spring at the Choir weekend away to Alsace in France, where the program for the year ahead is arranged and a considerable amount of Asti Spumanti is destroyed.

In 2005 they celebrated their major jubilee concert, for which their first CD “Höhen und Tiefen” (“Highs and Lows”) was released. After a folk song very nearly qualified them for an appearance on TV’s “Grand-Prix der Chöre” (similar to “Last Choir standing”) in 2007, the WEIBrations are now concentrating on their local live audience and are preparing for a major concert in their home town of Karlsruhe in November 2009.