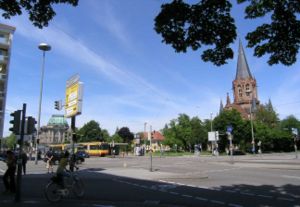 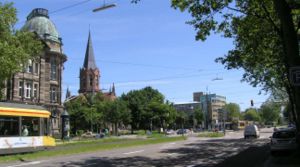 The historical gate (now in the Schlossgarten)

The Mühlburger Tor (“Mühlburg Gate”) is a landmark multiple road intersection in Karlsruhe at the border between the modern city districts of Innenstadt and Weststadt.

The Mühlburger Tor is located on the central east-west-axis of the city, just to the west of Kaiserplatz, where the central area and the Kaiserstraße end, and the “Weststadt” and the Kaiserallee to Mühlburg begin. Reinhold-Frank-Straße crosses the main axis from north to south, and several other street radiate in all directions: Amalienstraße runs south-east to the Bundesgerichtshof, Stephanienstraße runs north-east towards the Castle as part of the Karlsruhe fan, Riefstahlstraße runs almost due north but a bit west of Reinhold-Frank-Straße, Hildapromenade runs north-west, and finally, Lessingstraße and Hans-Sachs-Straße continue Hildapromenade and Riefstahlstraße southwards.

It is probably debatable whether to call the Mühlburger Tor area a “square”. Together with the neighbouring Kaiserplatz, it was certainly intended as an urban focus, but, in contrast to the Kaiserplatz, it does not today give any sense of city planning or architectural unity: decades of traffic improvement schemes included the removal in the 1960s of the last traces of the original gates and have rendered the “square” an unstructured mass of taxi stands, bus and tram stops, pedestrian crossings and left-turn lanes. Its only remaining focal points are the Christuskirche and a monument to one of the guards regiments of the Grand-Duke of Baden (“Leibdragonerdenkmal”).

In the 18th century, Karlsruhe's western city gate on the main road to the neighbouring town of Mühlburg, was initially at the intersection of Waldstraße and Lange Straße (today's Kaiserstraße). As the city expanded, it moved west at least twice: first by a few hundred yards to just past today's Europaplatz, then, at the beginning of the 19th century, to its final location just east of what today is Reinhold-Frank-Straße. The Mühlburg gate was flanked by a pair of gate houses and consisted of heavy iron gates, preserved today in the Schlossgarten.

From about 1862 until 1913, there was a railway station (the “Mühlburger-Tor-Bahnhof”) about a hundred yards south of today's tram stop. It was here that trains from the old Karlsruhe main station (located at the the site of today's Staatstheater) arrived after a journey along the northern part of Beiertheimer Allee and Mathystraße, and before travelling onwards either north on the “Hardtbahn” through what are now Riefstahlstraße and Erzbergerstraße towards Mannheim, or west on the “Maxaubahn” through Hildapromenade and Ludwig-Marum-Straße, past the old Mühlburg railway station and Karlsruhe's old Rhein port, across a rickity ponton bridge over the Rhein into the Bavarian Palatine. In spite of much building since, the layout, width and elegant curves of the roads mentioned bear witness to this day of old 19th century rail routes.

Late in the 19th and early in the 20th century, parks with monuments were laid out (Kaiserplatz, and later the parks in Hildapromenade) and impressive buildings were erected on both sides of the railway lines: the Christuskirche, the “Rathaus West” (Western City Hall, accomodating the fact that Mühlburg had become part of Karslruhe in 1886) and the buildings of today's Helmholtz-Gymnasium, a secondary school. There obviously had been the intention to elevate both the Mühlburger Tor and its counterpart in the east, the Durlacher Tor, to proper, elegant squares with an impressive church each, acting as outposts for Karlsruhe's central square, the Marktplatz with its Stadtkirche.

Several trams stop at “Mühlburger Tor” and there is a taxi rank.