Low Emission Zones (German: Umweltzone) are restricted traffic zones found in numerous cities throughout Germany, usually in highly populated areas, to reduce air pollution caused by particulate matter. No motorized vehicles are allowed to drive within a low emission zone, unless they are compliant with certain emission standards.

A low emission zone was enforced in Karlsruhe by January 1st, 2009. Since then, a special badge (German: Feinstaubplakette), visibly attached to the windshield, is mandatory to drive a motor vehicle within low emission zones. There are no exceptions for local residents. It is not decided yet if there will be exception for certain classic cars. These badges are available since March 1st, 2007, and can be obtained at your local DMV (German: Zulassungsstelle) or your local “Technical Inspection Authority” (German: Prüfstelle, e.g. TÜV or DEKRA). 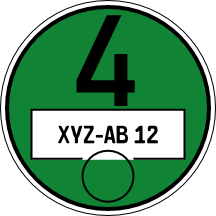